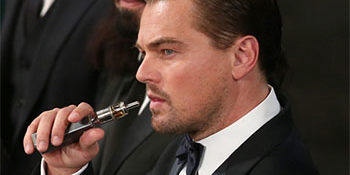 It seems that back in the Golden Age of Hollywood, smoking cigarettes was the “in” thing to do and all of the cool celebrities could be found chain smoking their way through movies, television series and nightclubs throughout Hollywood, New York and London. I suppose that was back when we didn’t fully understand the damage caused by cigarette smoke. Today, we know better and technology has brought us many new options. From patches and nicotine shots, to the more accepted version of smoking we all know as vaping, smoking has definitely evolved and modern day celebrities have taken to vaping and made it more than just an alternative to cigarette smoking, they have made it cool.

Just which celebs vape and which ones don’t? I feel that a Top Celebs Who Vape list is in order so you can see if your favorite TV and movie stars are part of the vaping community. Although this list doesn’t include everyone who vapes, we did bring you some of the more popular celebrities.

1. Gary Oldman- English actor, filmmaker, musician and author who has performed in theatre, film and television.

6. Jack Nicholson – American actor and filmmaker, who has performed for nearly 60 years and now vaping.

Why did we choose these celebs for our list over others? Vaping has become so popular, especially among celebrities, that we couldn’t include everyone on our list so we chose some of today’s more relevant celebrities from a wide range of industries. From movie and film stars, to musicians, comedians and more, the vaping community is growing every day and we are all proud to be a part of it. If you are new to vaping and you have questions, contact The Vape Shop now or leave a comment below and let one of our vapers assist you today!