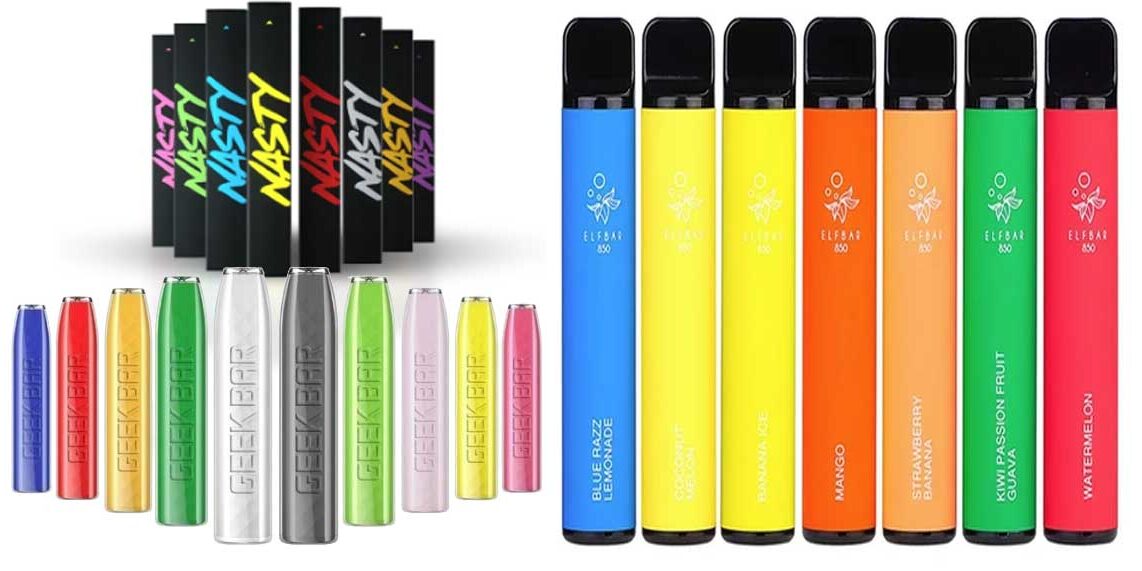 The disposable pod has fast become the leading e-cigarette sold…

If you have not heard of the disposable pod system, you must have lived under a rock in some remote and vape-unfriendly place. Every vape shop and every vape website has them on offer. The demand by vapers for disposable pods has outperformed the sale of all other vape devices. In this vape blog we look at the rise of the disposable vape pod and answer some of the questions vapers, vape shops and manufacturers have been asking themselves.

What Is A Disposable Vape Pod

Up to about a year ago, the vaping industry primarily focused on the sale and demand of refillable, reusable, and long-lasting vape devices. Standard reusable pod systems have been around for a few years now. Pod systems are generally slim, low-to-medium powered vape devices, mainly with plastic tanks (pods). The difference between a pod vape device and a vape mod is that vape mods are used to deliver a vape experience with MTL or DTL vaping and produce vape clouds. A pod device is simply used for the delivery of high nicotine. Vape pods usually have pre-filled pod tanks that must be switched when the liquid runs out, or the coils fail. Vape mods have tanks that can be refilled and have their coils replaced without losing the tank.

Disposable pods are very simply exactly that, disposable. When the battery or juice runs out, you simply throw them away and use another one. Filled mainly with 20mg of nic salt, these pods priced around £4.50 on average can last a user two to three days. They do away with the need for complicated maintenance, fiddly coil replacement and messy filling. The user simply opens the package, inhales and vapes away. When the device stops working, the user simply disposes of them.

Why Are Disposable Pods So Popular? 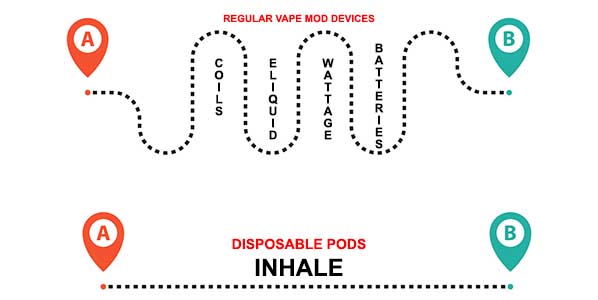 Disposable pods have exploded on the market and have fast become one of the top-selling vape devices on the market. There are several reasons for the popularity of the throw-away pod system and the main ones are:

One of the most experienced problems experienced with new vapers of middle age and above is the complication of using, filling and maintaining vape mod devices. Many vapers find it overly complicated with fussy to fill tanks, adjustable wattage, coil ratings, the replacement of dead coils and so on. With disposable vape pods, the user simply unwraps and inhales simple. No mess and no fuss!

A considerable difference that vapers like is the complete lack of any maintenance required by disposable pods. The user does not need to do anything but inhale. All disposable and throwaway pods come with the battery already charged, coil in place and pre-filled with nicotine e-liquid. Everything is ready for the vaper to start vaping immediately. Once the disposable device stops working, the user simply discards it.

Typically most throw-away pod systems on the market today have a nicotine strength of 20mg Nic-Salt (this roughly equates in strength to 24mg regular nicotine, read here for more info). This means that the vaper will experience a high hit of nicotine with every vape. Because of this, the user will typically vape less as their nicotine cravings are entirely sated. Standard vape mod users tend to vape regularly; vape mods/devices can use low nicotine e-liquid such as 0mg, 1mg, 2mg, 3mg, etc. This means some vapers use their devices a lot and can find themselves vaping frequently. The high nicotine disposable pod does away with the need for frequent vaping because of the large dose of nicotine with every vape.

One aspect of vaping that most vapers know is that vaping can be expensive, especially when a smoker first transfers over to vaping. The expense of buying your first whole vape kit or replacing a damaged or old mod can be high. On top of the initial purchase price are the ongoing costs associated with buying e-liquid, replacing coils, tanks and batteries. All this can add up. However, the average price of the disposable pod is around £4.50. This makes it a cheaper option than a packet of tobacco cigarettes and gives a false sense of saving significant amounts of money compared to splashing out on a complete vape mod kit. Let’s say that a disposable pod lasts on average two days. A vaper could be spending around £55.00 roughly every month compared to approximately £28.00’s per month with a standard reusable device.

How Is The Demand For Disposable Pods Affecting Vape Shops

As far as vape retailers are concerned, the immediate future of vape devices IS in disposable pods. The increase in demand for disposable pod systems by new and old vapers means that many vape shops have large and medium vape mod kits left unsold on the shelf. As this demand increases, savvy vape shops will complement or replace their standard expensive reusable mods with large ranges of disposable pods. While there will still be a market for small, medium and large vape mod devices, retailers that are not already stocking a full range of throw-away pods will find their customer base dwindling.

Most brand names in e-liquid and vape mods such as Dinner Lady, Nasty Juice, Vampire Vape, SMOK and more have (or are) putting out their own range of disposable pod systems pre-filled with their own brand e liquids. The problem retailers will face is that the all-important ‘profit margin’ of securing and selling these disposable pods is minimal, especially when the price wars between retailers get going. This will be a good thing for vapers as disposable pods become cheaper and cheaper, but the standard vape shop would have to sell in mass to gain some of the profit they would typically secure on the larger vape mod sales.