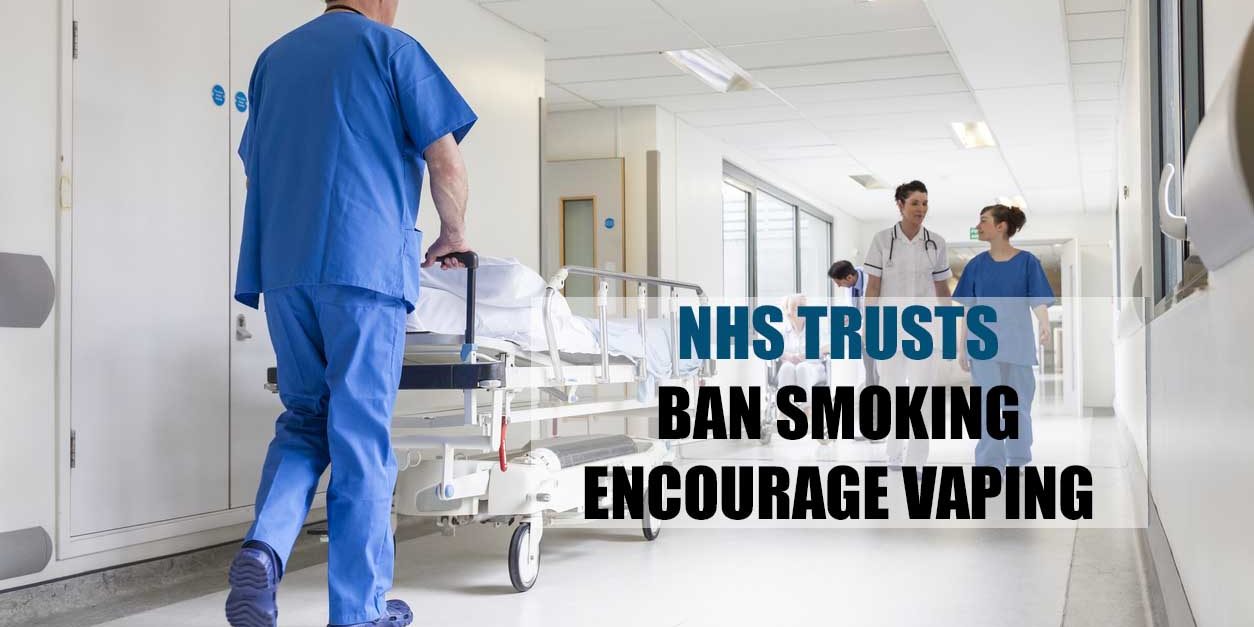 In a few months all Hospitals in the UK will enforce a complete ban of smoking tobacco cigarettes on their premises – including car parks. This ban will cause a lot of patient-smokers discomfort and irritability as they lose the cherished quick fag outside the hospital entrance. No longer will they be able to trot out of the ward and down the sterilised hallways to join the community of smokers all huddled together just outside the front door. Instead they will see a group of people vaping without a care in the world getting their nicotine fix.

Hospitals across the UK are being encouraged to allow vaping based on the new report from Public Health England. Up to now the NHS Trust has discouraged both tobacco smoking and vaping from hospital grounds. In light of PHE (Public Health England) stating that vaping is 95% healthier than smoking tobacco cigarettes plus the latest report Vaping In England 2020 the NHS is being asked to look into allowing vapers to vape throughout all the NHS sites in the UK. In fact vape shops have been opened up within two hospitals in the West Midlands which are run by Sandwell and West Birmingham hospitals NHS trust. The board of the NHS University Hospitals Plymouth at their Derriford Hospital is considering handing out disposable e cigarettes to help smokers quit tobacco. Derriford hospital is not alone as all UK hospitals have been encouraged to start selling e cigarettes to its patients who smoke tobacco in a bid to help them quit.

The PHE has gone even further and asked hospitals to look at allowing vapers to vape inside the actual hospital and at the very least building vape shelters outside their doors so that vapers have somewhere to go. Since most hospitals do not allow tobacco cigarette smoking on their grounds having a dedicated vaping shelter could be a serious enticement to patients switching from smoking cigarettes to vaping instead. At the moment only a few hospitals have taken this proactive change but it’s looking like more and more hospitals in the UK will follow suit. By allowing patients to vape is a really switched on move by both PHE and the NHS, and one that in the long run can and will reduce their costs, as many patients that hospitals provide services to patients who suffer from some sort of smoking related illness. According to the Government’s Tobacco Control Plan for England, smoking costs our economy in excess of £11bn per year. Of this, £2.5bn falls to the NHS, £5.3bn falls to employers, and £4.1bn falls to wider society. It is also estimated that smoking-related health conditions creates a demand pressure on local councils of £760m a year for social care services.

We still have a long way to go in busting the negative myths around vaping, despite the PHE’s findings, in the smokers public domain. However, these new initiatives even though only by a few NHS hospitals could be the start of change across the whole of the NHS and would be a major boost in helping smokers understand the reduced risk vaping offers. With over a third of UK councils cutting budgets and support for smoking cessation services such as local stop smoking groups smokers more than ever need extra support from organisations such as the NHS. For too long the NHS has shied away and even downplayed the reduced risks of vaping. Instead the NHS has promoted other NRT methods which the PHE report has clearly shown do not work as well as vaping.