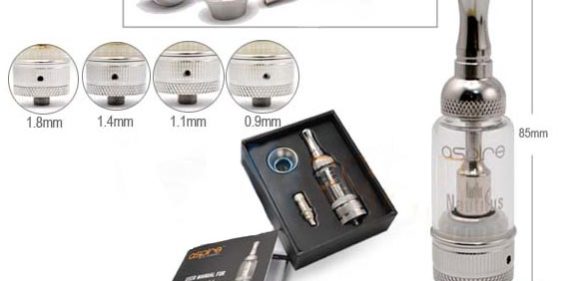 The latest technology to arrive in the clearomizer tank market is the arrival of the adjustable ‘Air-Flow’ tanks which used to be only a feature on a very few large capacity (and costly) tanks such as the Kayfun Lite Plus and The Russian. Now however the ‘Air-Flow’ feature is fast becoming mainstream with the likes of KangerTech, Aspire and Innokin to name a few producing a range of their own designed air-flow clearomizers.

KangerTech has already produced the AeroTank which has an adjustable ring allowing you to select different air-flow capacities and so have Aspire with the Nautilus. Pretty soon most of the clearomizer units on the market including the very basic ones will have some form of air-flow control. The Air-flow control has been likened to the appearance of the CE4 over the original EGO C and is set to have the same impact.

At the moment these new style of clearomizer tanks are costly ranging from 15 to 40.00 pounds (excluding the Kayfun and Russian), however we will gradually see a decrease in price and an increase of product choice as the Air-Flow- clearomizer market grows.

Having the ability to adjust the airflow on the tank allows you to either tweak or totally transform the types of hit you get. Believe it or not there are two main types of vapers, those who like a throat hit and those that like a lung hit. The airflow system will change the amount of air intake while you are inhaling and either strengthens the hit of throat or of the lungs when you inhale.

It’s a cool feature that gives vapers more control over the type and strength of hit they receive and this new added feature to the tank is already causing serious excitement on the vapers forums.