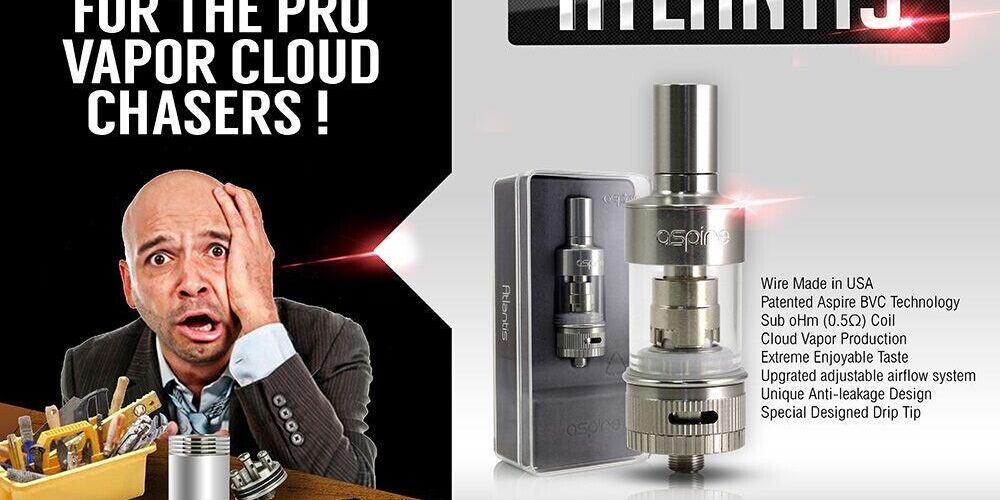 I have been using the Aspire Atlantis for some time now and I am pleased to say that the statement by Aspirecig –  “The Atlantis performance is similar to even the best rebuildable atomizer…” – is absolutely true!My Personal Review of The Aspire Atlantis Tank

I have been using the new Aspire Atlantis tank on a Cloupor T8 and have settled for 28 watts to suit my vaping requirements. I have used the Atlantis at 35 watts but as Im a PG vaper this is a little high for me personally. If you’re into your VG then this tank will perform up to the recommended 40 watts.Personally I do not like the massive mouthpiece the Atlantis comes with, but because the tip is changeable, I easily replaced it with a slimmer stainless mouthpiece and WOW what a vape! I have got to say that for the first time in my vaping life I have experienced true satisfaction when it comes to throat hit, inhale, flavour intactness and vapour production using a non-RBA tank.Cloud Vaping Using The AtlantisWe have all seen the cloud vapour produced by people using RBA’s. You know the ones… they usually let of a massive cloud just to announce their superiority over other vapers in The Vape Shop. If you have envied the cloud vaping abilities of RBA users but dislike the messiness of self build atomizers then the Atlantis is your chance to respond with a like-for-like vapour cloud. And rest assured this tank does perform exactly like the best of the RBA’s. Compared with the Tugboat V2 self build atomizer, for example, the Aspire Atlantis matched vapour cloud performance to the point we had to keep checking we were using the Atlantis and not made a mistake using an RBA as it just produced cloud after cloud. Features Review Of The Aspire Sub Ohm Atlantis TankFirst of all the main feature of this new tank from Aspire is the Sub Ohm coil with a resistance of 0.5 ohms Aspire has managed to replicate the performance of most the top RBA’s. This Sub ohm coil can take up to 40 watts and deliver a massive cloud atomizer performance without all the finicky messy self build issues. Another strong feature of the Aspire Atlantis is the special RDA-style airflow ring system located on the base which allows for various small to large airflow settings which are larger than the Nautilus tank. The main parts of the Atlantis tank are, as you would expect, built from the best components such as pyrex tube, stainless steel housing and, adding in the special anti-leak design, really puts the Atlantis among the top tanks to own for serious vapers.Battery Compatibility For The AtlantisThe Atlantis tank made by Aspirecig requires powerful batteries and WILL NOT work on traditional EGO style batteries. Aspire do sell a range of batteries suitable for the Atlantis however I use it with my Cloupor T8 (up to 150 watts). I have tried it with Vision Spinner 2’s and 1100mah EGO Twist and didn’t even produce a wisp! So definitely not for the average battery.